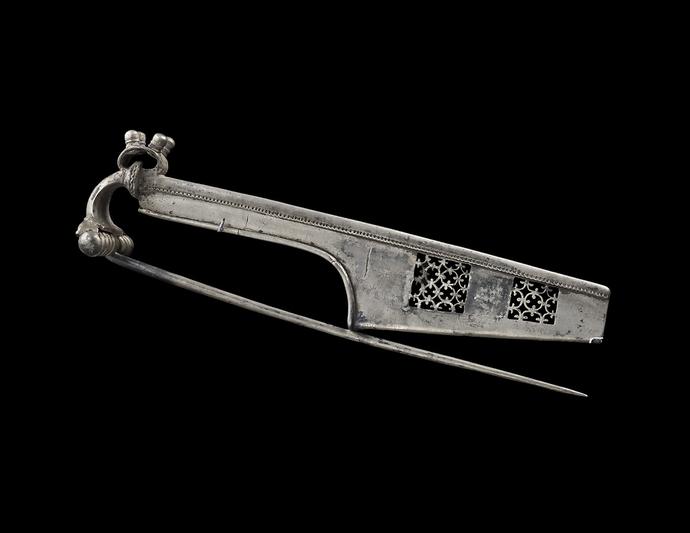 This ornate fibula is a fine example of a rare brooch type known as a ‘wing fibula’, so named because of its small, up-curved wings on top of the bow element. It is a style most typical of the Roman border province of Pannonia, the region encompassing parts of modern Austria, Hungary, and neighbouring countries. Such brooches attest to the taste in elaborate jewellery among women in the provinces, as well as the to the popularity of local styles in different regions of the empire.

The fibula is constructed from different parts consisting of a sheet foot with two square pierced lattice panels, and a foot-plate with a rolled edge, fashioned in this manner for reinforcement; both features are sophisticated elements of design and indicate that the craftsman was highly accomplished. The pierced decoration on the foot plate is a characteristic of the finer examples of the type. Designs can range from simple lines of holes to the complex, lace-like tracery of the present example.

The reinforced edge of the foot-plate suggests that the brooch was intended for real use, not just for ceremonial wear or as a votive object. On the basis of archaeological discoveries and depictions on different artistic media, it is known that fibulae of this kind were worn by fashionable Pannonian women in pairs, one on each shoulder, no doubt as a conspicuous symbol of high social status. The intricately pierced catch plates would extend above the robe, catching the light and creating a delicate patterned effect. An interesting contemporary parallel is displayed in the Metropolitan Museum of Art in New York (inv. no. 1998.76).