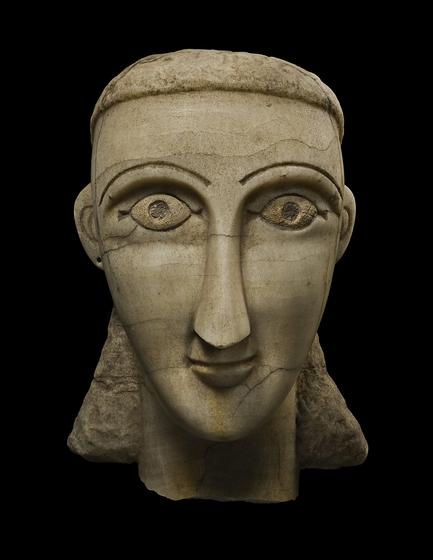 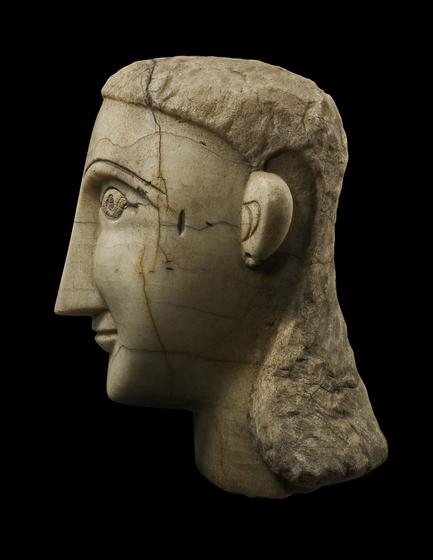 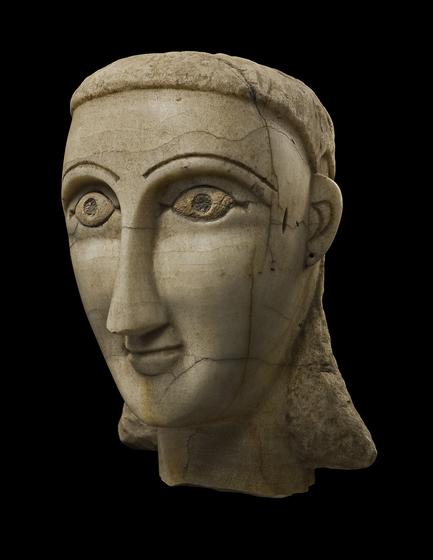 This preserved female head was once part of a statue, and is a fine example of South Arabian dedicatory art, depicting the head of a female in the round. The face of the figure is carved in a beautifully ovoid manner with delicate cheekbones, a flaring nose, the mouth carved in low relief. Below are gently cut pursed lips. Two graceful sweeping arcs form the brow line, complemented by incised eyebrows; its almond-shaped eyes are inlaid with limestone and the remnants of shell partly fill the pupil. The hair is skillfully executed, overlying the forehead in low relief and cut to accentuate the coiffure, sweeping downwards and widening towards the area of the shoulders. Its aesthetic properties demonstrate the careful selection of the calcite-material, elegantly stratified and expertly contoured to produce the artistic form, its surface carefully polished in a fine shine and overall finish.

Originally, the figure may have belonged to a seated or standing statue. Comparison with complete representations indicate that the arms would have been outstretched horizontally, forming a right angle at the elbows, allowing a votive gesture. This guise is probably in supplication to a principal deity, perhaps ‘Athtar, a male god, worshipped in all kingdoms of the region; or alternatively deities restricted to Saba’, such as Hawbas the female counterpart to ‘Athtar, ’Almaq the ‘national’ deity of the kingdom or the principal god Ta’lab, and his female consort Nawsham, in their cult centre at Riyam. In its broader context the figure was therefore an active participant in the primeval religion of South Arabia, centred on the temple worship of preserved sites at Ma‘in, Marib, Baraqish, and elsewhere.

Stylistically, the facial attributes of the present figure are closely paralleled by examples in the British Museum, perhaps from Tamna’ (Inv. 141544, second century BC to first century AD); and the Arthur M. Sackler Gallery, the American Foundation for the study of man (Inv. Tx 1975, first century AD).