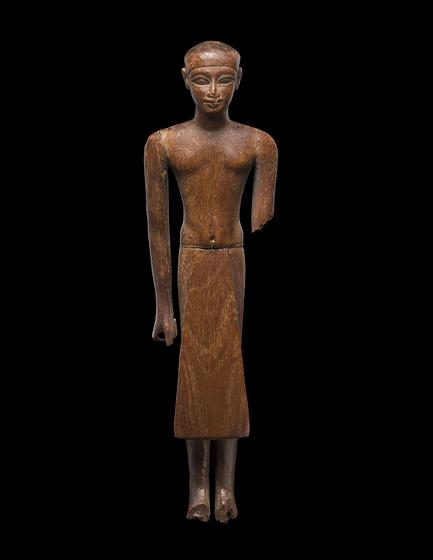 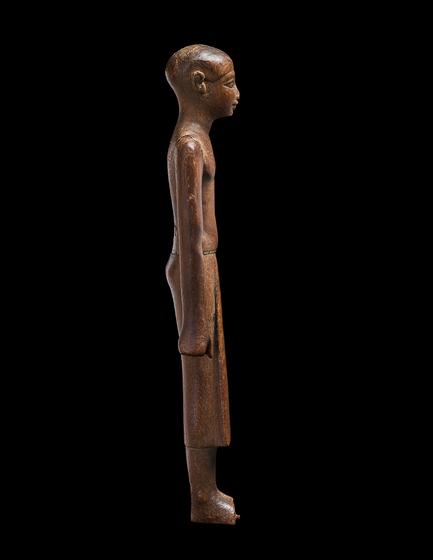 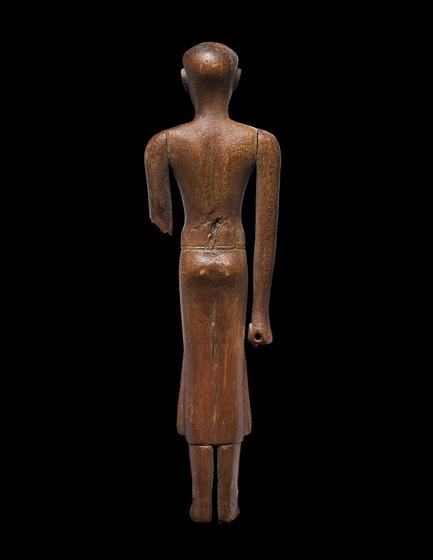 In ancient Egypt, it was believed that, after death, one’s ka, or unique energy, would continue to exist and could become housed within a statue, especially one that illustrated an idealized depiction of that individual.  Such ka statues, were widespread amongst the most elite echelons of society from the Old Kingdom through the Middle Kingdom.  They were usually placed in the deepest part of the tombs near the mummy itself, some were even contained inside the coffin.  Such figurines were often inscribed in hieroglyphs with the name, epithets and details of the individual.  While some, such as the present example, were left uninscribed, for his identity would be easily discerned for the proximity to the mummy.

The iconography of this exceptional wood figure indicates that the individual here represented was a high ranking official.  His calf-length kilt, with its firmly-starched sharply-folded trapezoidal section at the front was reserved for men of a certain age, as it denoted maturity as well as stature within one’s profession.  His closely-cropped hair, or wig, was likely painted with individual curls, in the fashion of the period.  His hands were fisted (one preserved) to grip attributes, perhaps a scepter or a rolled cloth.  Tenons below the feet originally secured the standing figure to a separately-made base.

As was customary, the head, torso and legs were carved together from one piece of wood, while the arms, and the front portion of the feet were added separately and fitted into place with dowels.  One feature that makes this statue particularly rare is that his feet are placed parallel together, rather than one before the other in mid stride.  While it is an unusual positioning, there are several known parallels, including two in the Cleveland Museum of Art, accession nos. 1914.807 and 1914.804.

Many Egyptian wooden statues representing individuals were embellished with brightly colored pigment and gilding.  These adornments were often fugitive and have not always survived the millennia.  The exquisite designs caused by the grains of the wood have encouraged scholars to infer that some were left unpainted to highlight these natural features.  Without scientific discovery of trace pigmentation, it will be impossible to discern whether this figure was once painted.  A related example in the Metropolitan Museum (acc. no. 11.150.27) still preserves much of the original pigment, especially on the kilt.

The present example was once in the collection of the late Seward Kennedy. Kennedy spent decades of his adult life in the mid twentieth century as a lawyer for Mobil Oil, during which time he traveled extensively throughout the Eastern Mediterranean.  His great interest in the ancient civilizations of that region fueled his impassioned collecting, which he deeply treasured and which continued to expand up until his death in 2015.