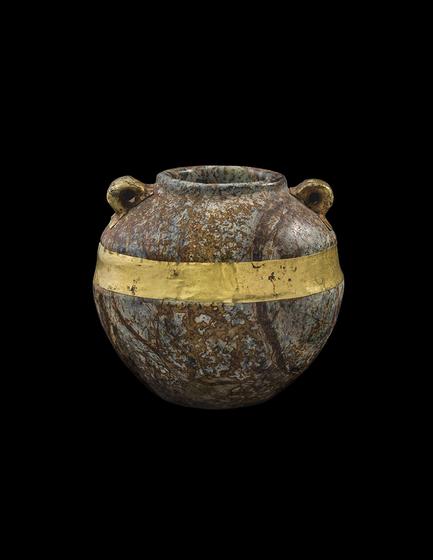 Sheet gold was applied to stone jars in ancient Egypt as early as Predynastic and Early Dynastic times. A stunning enhancement to the often already beautiful stone of the vessel, the addition of gold seems to have been reserved for containers that were the exclusive preserve of royalty. The oldest extant record of the technique of making gold leaf or foil comes from a tomb painting from Saqqara, dating to around 2500 BC, which depicts two artisans melting gold using blowpipes, and a third beating the gold using a round stone. The technique was perfected by the eighteenth dynasty, when artists were able to achieve sheets of exceptional thinness. During this time, the use of sheet gold on cosmetic vessels of remarkably fine quality is seen specifically during the reign of Thutmose III, among the grave goods of three royal wives.

The present vessel, made from an unusual reddish-brown stone interspersed with blue-grey colouration, would have been one such luxury cosmetic vessel, intended to store precious perfume or ointment for its privileged owner. Spheroidal in form, it has a flattened base, allowing it to stand without support, and a narrow mouth. The two tubular handles are covered with rectangular plates of sheet gold. The vessel is clearly very similar to, and closely inspired, by Egyptian models, but the upturned handles placed near the rim of the vessel, and the globular shape with flattened base do not strictly adhere to Egyptian types, suggesting instead a Phoenician origin.

Although the relationship between Phoenicia and Egypt was continually changing due to evolving political and economic factors, Egyptian influence on Phoenician art remained prominent; the Phoenicians imported gold from Nubia and learnt the technique of hammering from the Egyptians. Egyptian cosmetic vessels were traded with and imported to Phoenicia, where their designs were imitated and adapted. A vase now on display in the National Museum of Beirut shows the practice of applying sheet gold strips to the body of the vessel, as on the present example.

As part of the trade in luxury goods across the ancient world, expensive vessels of various types made from fine decorative stones also appear in the tombs of royal and elite individuals in the Near Eastern sphere. Exchange between Egypt and the Near East saw stones imported from far and wide, and designs developed from Egyptian prototypes, for example the use of alabastra. Perfumed oil was sent from Egypt to Mesopotamia in large quantities, a fact attested by many letters dating to the Amarna period. As such, small vessels used for the preparation and storage of aromatics and cosmetics abounded in royal circles. Later, during the seventh century, vessels in precious stones were also sometimes decorated with bands of gold – antecedents for these being the Egyptian or eastern Mediterranean discussed above. Such imitation of Egyptian designs suggests admiration for these evidently highly-prized items.

This rare and charming receptacle, then, is testament to the extensive networks that facilitated the exchange of luxury goods and artistic expression throughout Egypt, the Near East, and the Mediterranean. Its exquisite form and use of expensive materials underscores the significance ascribed to the use of exotic perfumes and oils, and the need to create containers worthy of holding such precious contents.